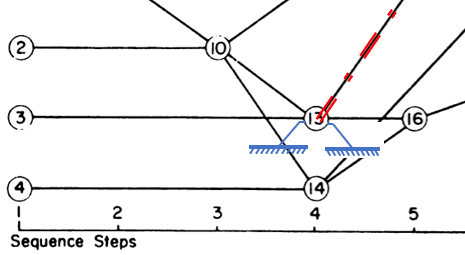 Here I review some impacts of “hard constraints” on the calculation of total float (or total slack) in logic-driven schedules.

First a Note on Defining “Soft” and “Hard” Constraints

Both the DCMA 14-Point Assessment guidance (Nov’11) and the GAO Schedule Assessment Guide (Dec’15) also list late date constraints — start-no-later-than (SNLT) and finish-no-later-than (FNLT) — as hard constraints, even though they do NOT cause violations of logic restraints in most scheduling software.   The reason for this is unclear, though it may be related to the default “tasks will always honor their constraint dates” setting in Microsoft Project.  Under normal scheduling, this setting automatically converts a late date constraint to a mandatory constraint when it creates negative slack/float.  Another document (Planning and Scheduling Excellence Guide – PASEG v.3 – from the National Defense Industry Association) seems to recognize this issue, stating “Hard constraints do not allow the logic to drive the schedule (i.e. either restricts all movement or restricts movement to the right) on the constrained task.”  In this context, “restricts movement to the right” describes the impact of the setting on early dates (i.e. the default Start and Finish dates) in MSP.  Unfortunately, the DCMA 14-Point Assessment guidance continues to equate negative float with the existence of a hard constraint.  Such a position seems unsupported by any consistent set of base principles.

A recent discussion on technet raised the issue of slack/float calculation for tasks with hard constraints – in this case Project’s “Must Start On” (MSO) constraint.  A novice user of Microsoft Project (MSP), was puzzled by MSP’s calculation of non-zero total slack for an MSO-constrained task who’s early and late dates were the same.  That is, the expected definition of Total Slack as “Late Finish minus Early Finish” [*] was clearly NOT being followed.

*[The traditional CPM definition of Total Slack/Float is TS=LF-ES-Dur.  When Duration is a constant (as in MSP and P6) this simplifies to:

Consider the simple example comprising a three-task schedule with an MSO constraint on the second task and a deadline (a soft late constraint) on the third task, which I’ve shown below.

There are two basic issues about MSO (and MFO) constraints in Microsoft Project that come into play:

The example presented is a “Mandatory Constraint,” which is strongly discouraged in general and is explicitly prohibited in many contexts.  Unchecking the “Tasks will always honor their constraint dates” box softens the impact of the constraint, but logic flow through the task is still interrupted.  Because of these issues, users of MSP would be well advised to avoid MSO or MFO constraints in any context where scheduling logic (and Total Slack) are important. 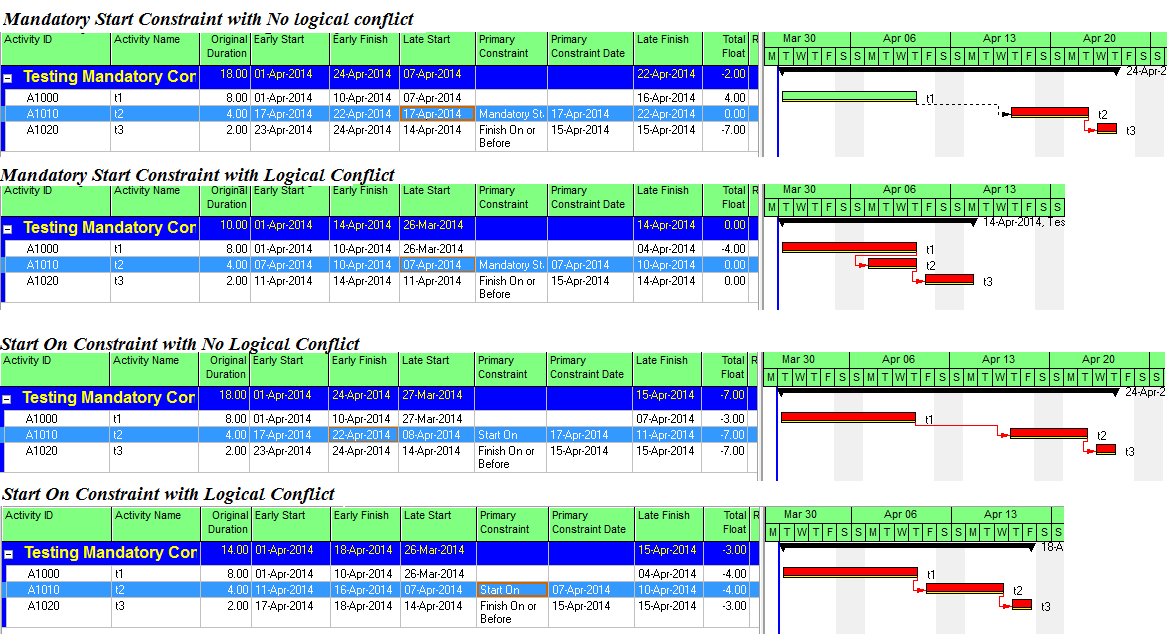 With the checkbox un-checked, the resulting MSP schedule appears similar at first to P6’s schedule when using a (softer) constraint like “Start-On”.  This should not be misinterpreted.  As shown in the next chart, MSP continues to over-write the late date with the constraint date, even when the CPM-based late date is more restrictive.  Resulting predecessor slack values may be incorrect.  P6’s “Start On” constraint, on the other hand, results in a correct float calculation for the imposed conditions.