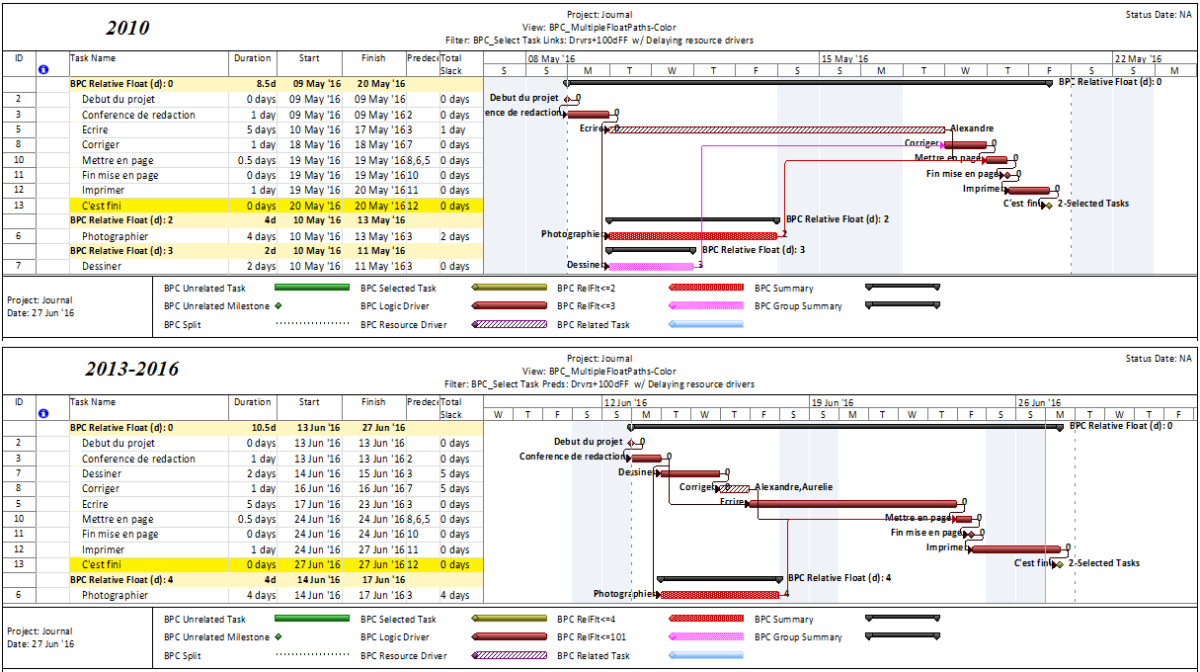 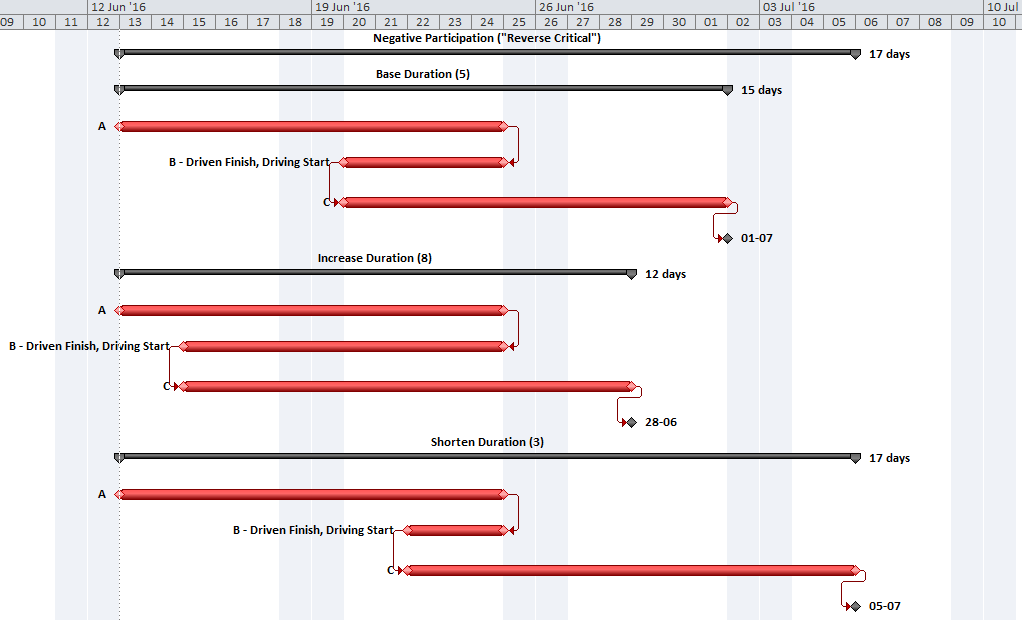 In logic-driven project schedules, the scheduled start and finish of each activity is determined by a “driving path” of predecessor activities and relationships.  Driving logic is said to “flow” along this path from the earliest predecessor to the activity’s completion.  In simply-modeled projects, this driving logic flow is one-directional and continuous, such that any delay (or acceleration) of a predecessor task is directly translated to a corresponding delay (or acceleration) of its ultimately driven successors.  Thus, delaying a task on the “Critical Path” (the driving path to project completion) ultimately delays the project.  More complex schedule models – i.e. those using other than finish-to-start relationship links – allow the driving logic flow to be checked or even reversed, so delay or acceleration of a given task may not have the anticipated result on other tasks or on the project as a whole.  Such effects can be transient, appearing and disappearing in the course of a single progress update.

Last year I read a series of articles by Miklos Hajdu (Research Fellow at Budapest University of Technology and Economics) on the sometimes-unexpected consequences of certain relationships in logic-driven project schedules.  I encountered them again a few months ago during an extended Linked-In discussion that Hajdu started relating to Drag calculation.  (BPC Logic Filter is one of the few scheduling tools that actually sets out to compute drag, and we identified some areas needing standardization of definitions.)

Hajdu’s Articles laid out five basic cases where incrementally delaying or accelerating a particular Critical Path activity might not lead to the expected delay or acceleration of the overall project:

A more recent blog by consultant Pat Weaver, Critical confusion – when activities on the critical path don’t compute…… reviewed these cases and illustrated the consequences using time-scaled-logic diagrams rather than the simple fragnet blocks first used by Hajdu.  With graphical images especially, Weaver has done a great job of clarifying the underlying logic flow and emphasizing the consequences of careless planning.  His article is a good read. Unfortunately, his suggestion that competent planners should avoid creating any such constructs in their project schedules seems impractical for planners using P6 or Microsoft Project to schedule complex projects.

I had encountered all of these issues previously in various project schedules and and had focused on them quite a bit while developing the drag-associated parts of BPC Logic Filter – that’s where the “Negative, Positive, and Absolute” terminology below came from.

Driving Logic Flow of the Cases

At the start of a project (i.e. ignoring progress updates and Data Date), every activity is scheduled to be completed according to a path of driving logic (comprising predecessor activities AND relationships) extending from the project start milestone or some valid external constraint forward to the activity’s Finish. (For the particular case of the Project Completion activity, its driving path is synonymous with the “Critical Path” of the project.)

Keeping in mind that any changes to activity duration can immediately change the driving logic flow through the schedule and the associated relationship floats – such that an activity described by the first line of the table above may jump to the third line simply by adding a day to its duration – we can interpret the table as follows:

Within P6 and MSP schedule models, using Ladder Logic to approximate progressive feeding of work volumes between largely parallel activities is a technique that effectively models the actual work interfaces.  Yet it seems virtually guaranteed for such paired-activity ladder structures to encounter at least “neutral-critical” and sometimes “bi-critical” driving logic flow during updating.  In my opinion this should be acceptable as long as the paired activities are effectively managed together.

Negative (“Reverse-Critical”) driving logic flow, however, reflects a case where the work being depicted is too complex to be represented by a single activity, and further breakdown is needed.  Since it also provides an opportunity for the scheduler to sequester or otherwise manipulate float, the underlying logic structure may be indirectly prohibited by scheduling specifications.  BPC Logic Filter presently flags reverse flows of driving logic (using negative drag) during the drag analysis.

The multiple cases where the driving logic flow effectively bypasses an activity’s duration (“Neutral-Critical”) appear to be a natural outcome of the scheduler’s intent.  In addition, they seem consistent with the actual work interfaces in some construction projects, particularly where there are substantial variations in the production rates of parallel activities.  While BPC Logic Filter doesn’t currently identify such cases, it seems reasonable to modify the Gantt-bar coloring routines in a future release.