I’ve been using the JUMP buttons on the task logic inspector windows – a lot.  These are great complements to the rest of BPC Logic Filter.

[Dec’20:  Here’s a different demo of the Limited Logic Inspector – essentially the same inspection and jumping functionality, but without the extra logic analysis.]

Mandatory waiting times between certain tasks are a common feature of many project schedules.  In construction, the typical example is concrete curing time.  That is the time interval (typically under a week) after a batch of concrete is placed but before it gains sufficient strength to remove/strip the formwork and continue working.  Similar wait times can be required in non-construction projects. Common features of such waiting times are:

Consider a 5-day curing time in a Microsoft Project (MSP) schedule using the default Standard calendar (i.e. 5dx8h Monday-Friday work week).  The curing process always occurs over a mix of working and non-working (night and weekend) time.  Since the number of workdays included in this period varies from three to five depending on the time and day of the week that the concrete placement finishes, it is not possible to specify a fixed curing duration (in Standard-calendar workdays) without introducing an unnecessary delay in the schedule.

Instead, there are four obvious modeling techniques to accurately schedule the curing and follow-on activities:

As shown in the figures, all four techniques can be used to generate the same (early) schedule dates for the project.  Which technique to use depends on a few factors.

Unfortunately, the only out-of-the-box method to ensure that the entire critical path is captured is to raise the Total Slack threshold from the default value (zero) to some number that is judged high enough to capture all the truly critical tasks. I have found such an approach unsatisfactory for a variety of reasons.  In any case, the true Critical Path – i.e. the driving logical path to project completion – remains obscured.

Fortunately, the Longest Path algorithm in BPC Logic Filter is indifferent to which modeling approach is used.  As shown in the figure below, the driving logical paths are correctly identified for each case.  (The number to the right of each bar is the task’s path relative float with respect to the project completion task – zero for the longest path.  BPC Logic Filter typically depicts logical driving paths with a dark red bar.) 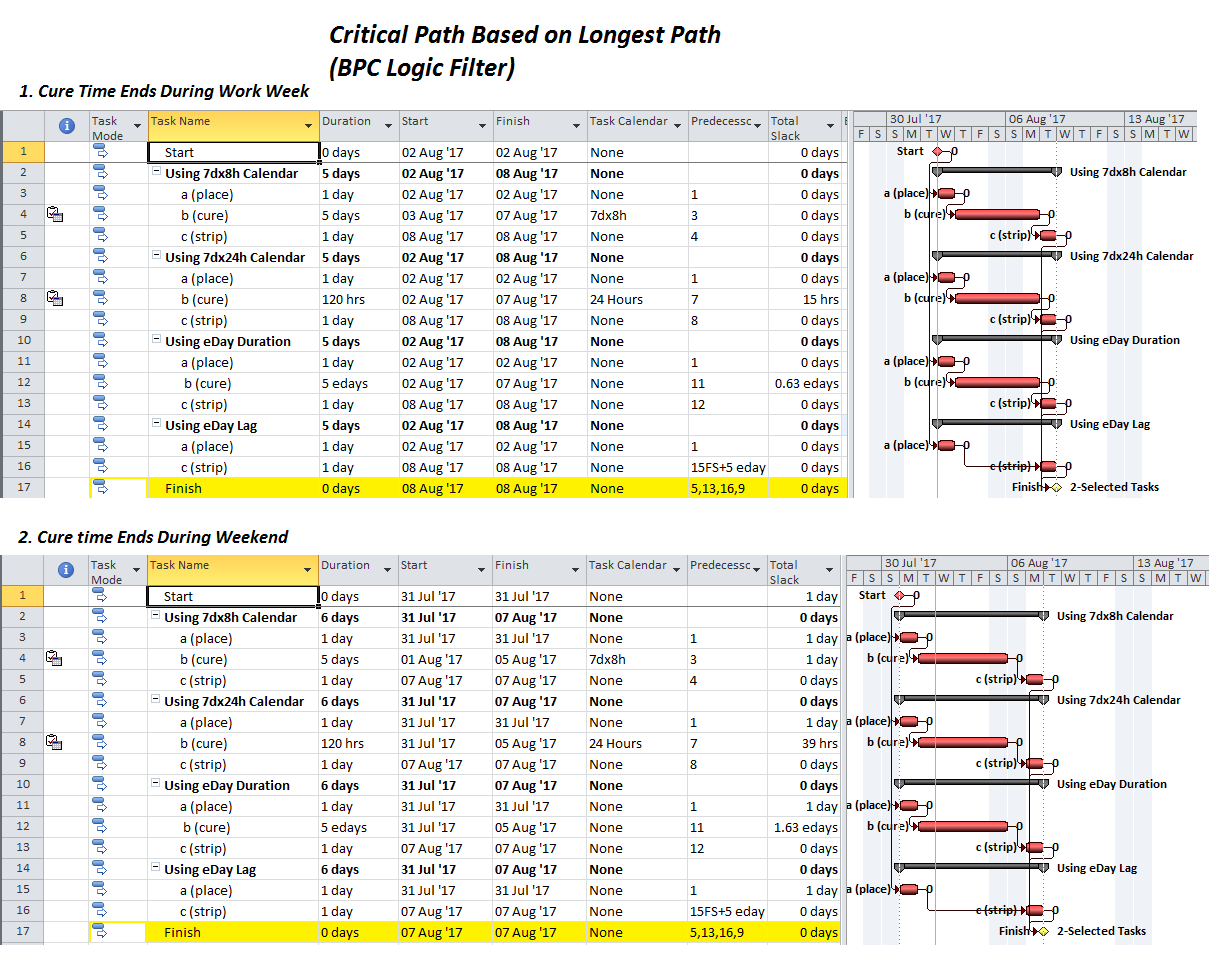