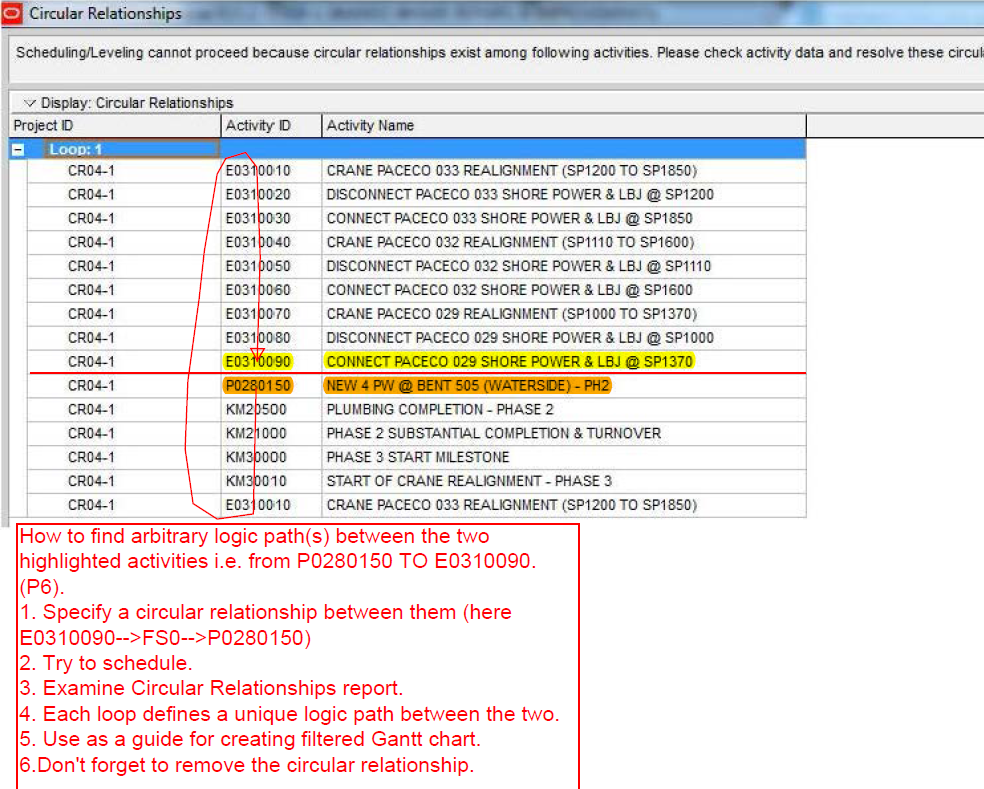 BPC Logic Filter includes a little feature called Bounded Network (Target Task) Analysis.  The feature allows a user to identify all the logical path(s) connecting two arbitrary tasks (or connecting a group of tasks to a single task) in a Microsoft Project schedule.  I wrote a few (very dry) pages on it beginning around page 6 of the documentation: Introduction to BPC Logic Filter

I developed this feature out of my own need to efficiently communicate task dependencies to project stakeholders.  For example, a piece of major equipment is scheduled to arrive on-site (pre-assembled) on 1April, but it is not scheduled for handover until 1July.  For the eventual equipment owner, it is useful to have a graphical depiction of all the tasks – and only those tasks – leading from arrival to handover during the intervening three months (e.g. setting in place, hookups, mechanical inspection, systems testing, commissioning, acceptance testing, endurance testing, training, etc.)  While sometimes such tasks all share a common WBS code or custom field, it is rare that such codes correspond 100% with the logical chain(s) of required activities.  A logic-based filter provides a clearer picture.

Within the last few days I participated in a LinkedIn discussion on how to develop a similar filter in Primavera (i.e. Oracle Primavera P6), and I’m embarrassed to admit that my initial suggestions (to use Multiple Float Path) were completely wrong.  In fact, the quickest way to show the connections between two arbitrary activities is to create a logical loop between them, then try to reschedule the project.  P6’s error handler will list all the connecting tasks.

P6 won’t generate the logical filter for you, but the user interface has a very handy feature of being able to add activities to a pre-existing view by simply clicking on the “Goto” buttons in the relationship windows.  The list generated by the loop error will guide your selections.

Here’s an example, taken from a ~2000-activity schedule for an ongoing marine project.  I have selected two activities whose relationship is not obvious, but which are indeed related.

(Using Multiple Float Path analysis of the electrical activity “Connect Paceco…,” I found the plumbing activity “New 4 PW….” activity on float path 168.  I didn’t count the activities in float paths 2 through 167, but we need to exclude most of them without examination.  MFP is clearly not the answer.)

As shown on Figure 1, I first add a circular successor relationship from the later activity, “Connect Paceco…” to its distant predecessor, “New 4 PW….)  Then I try to re-schedule the project.  If no error is generated, the two tasks are not related, or the predecessor/successor direction of the connections may be the opposite of what you expect.  Figure 2 shows the expected error message, with the listing of the looping paths.

Now use the list as a guide to attach the connected activities to the existing view.

The result after completing the loop:

You might be tempted to make this into a permanent filter by assigning some custom coding to the visible activities and then making the corresponding filter specification.  That doesn’t seem to be worth the extra time to me unless I know for sure that I will be using this filter again.  A pdf or screen shot may be all I need.

Many thanks to Khuong Do for raising this question in the Primavera group on LinkedIn.  In addition, while the method of manually constructing logical filters by jumping through relationships has been around for many years, I thank Zoltan Palffy and Gail Adams for reminding me that it is still there in P6.  Using the circular logic report is something I would never have thought of on my own.  All credit to Mr. Gerry Smith in the Primavera LinkedIn group for that stroke of genius.

Just for comparison, I used a laborious process to export this project from P6 to Microsoft Project so that I could run the similar report from BPC Logic Filter.  Here’s the result.  Yellow and Orange highlighters identify the “Selected” and “Target” tasks respectively.  (The P6-to-MSP export/import process is crude: Activity IDs were lost.  Calendars were lost, so dates were corrupted.  Logic came through with no problems, however.)