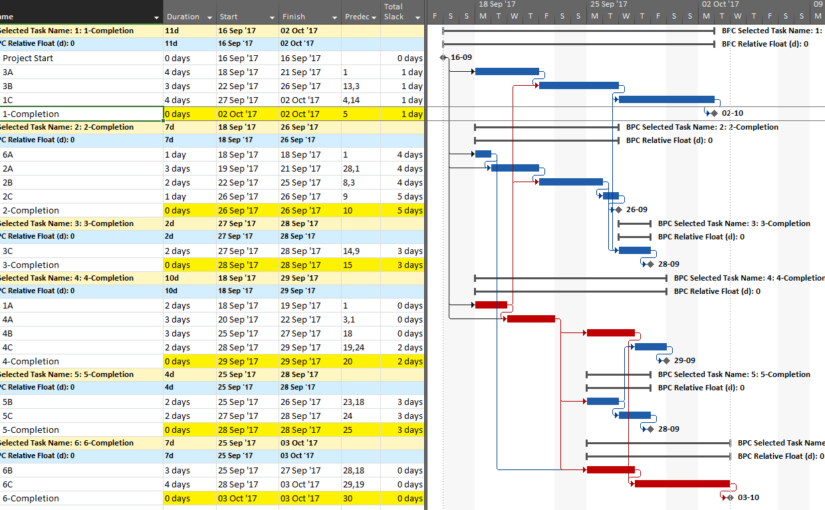 While writing an article on Multiple Critical Paths a few years ago, I knew that BPC Logic Filter (our add-in for Microsoft Project) could easily identify multiple critical paths (and near-critical paths) in any project schedule, but we needed to analyze key milestones one at a time.  In most cases I think that’s still the best approach to understanding the factors that drive (and may delay) key project deliverables.  Nevertheless, the latest build of the software (1.5.5.13) includes a new setting that facilitates simultaneous analysis and display of the critical paths to multiple milestones in a project or program schedule.

The setting – Group Results by Selected Task – is found on the Tracing Preferences tab of the software settings, and we enabled it as part of the initial distribution of the build.  We hope that at least a couple users have been pleasantly surprised.

This short article provides a couple illustrations of the feature in action.

First, here is the simple example project from the previous article.  The project comprises six “phases” of inter-related tasks in a Microsoft Project schedule, now displayed using MSP 2016 rather than MSP 2010 as before.  The project has no deadlines or constraints, and MSP designates critical tasks (red bars in the chart) based on total slack (TS<=0). 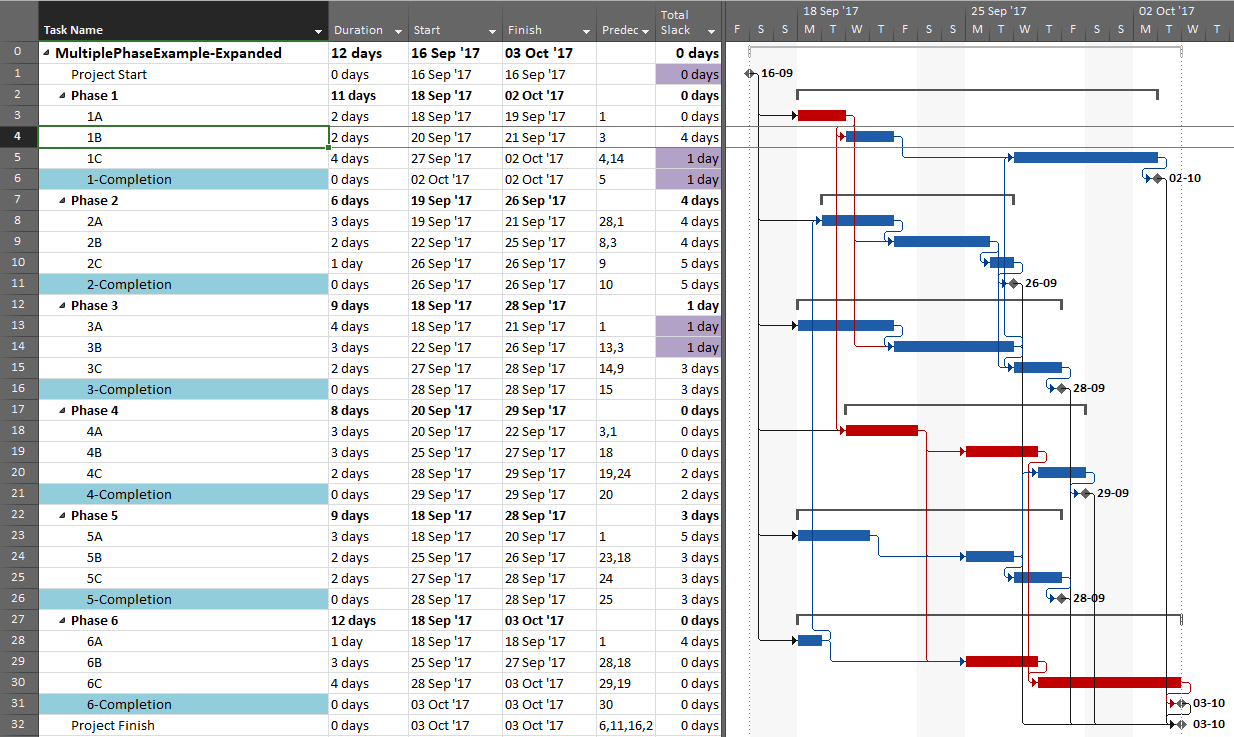 In the previous article, I illustrated – using MSP and Oracle P6 – several generic techniques to identify the unique critical path for each of the six phase completion milestone in the project.  I also used BPC Logic Filter to graphically illustrate the critical- and near-critical paths for the Phase 1 completion milestone, displayed within the context of the overall project (and repeated here in MSP 2016). 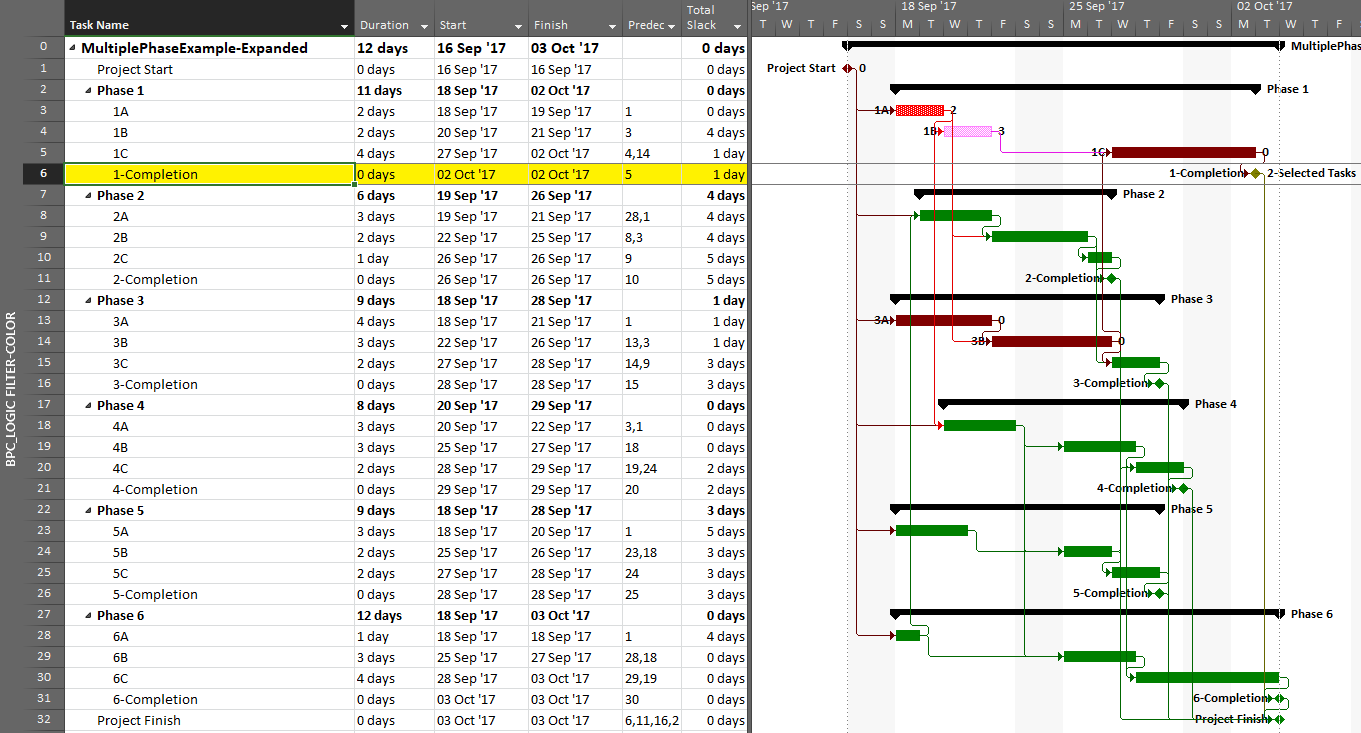 Going back to the original project, we can now run the task logic tracer with all six phase-completion milestones selected.  The Standard Edition of BPC Logic Filter then allows us to select driving-path predecessors and to re-sort the results to show logical branches (i.e. paths). 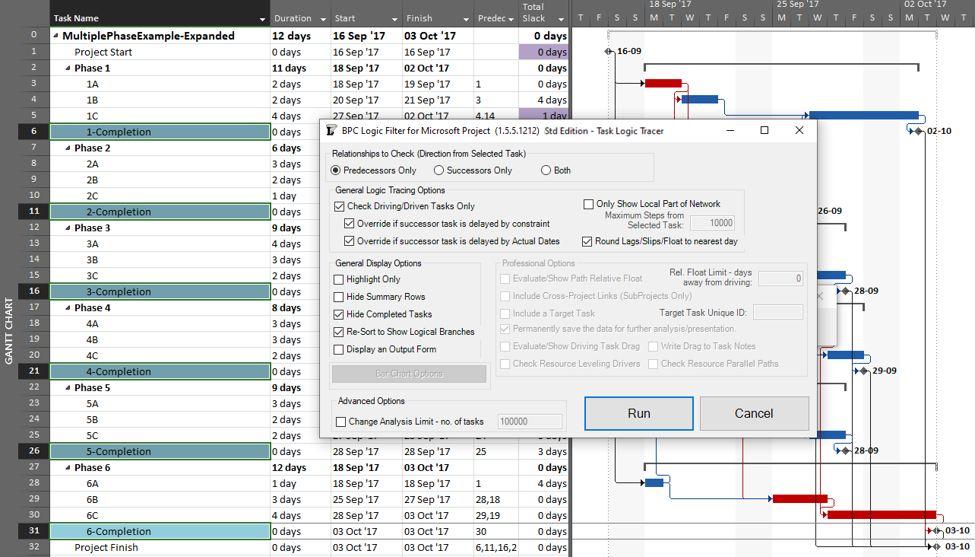 The result is a grouped view displaying the driving predecessor path to each of the six phase-completion milestones. 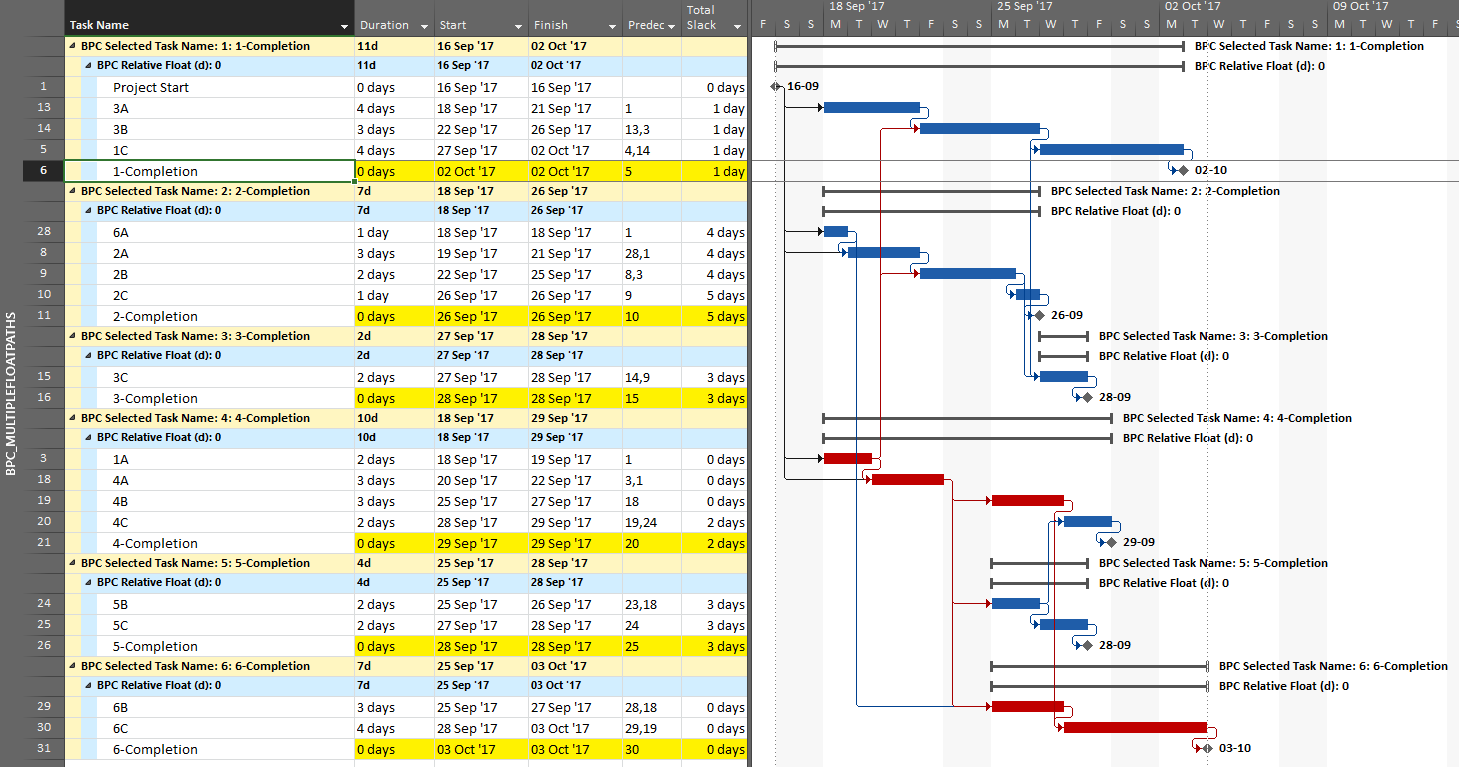 Due to intersecting logic, some tasks are on the driving/critical path for more than one completion milestone, but the Gantt chart only allows them to be displayed once.  The task logic tracer displays such tasks together with the driven milestone that is encountered first in the original task selection.  Thus, while tasks 1A, 4A, and 4B are critical for the overall project and for the phase-6 completion, they are displayed with the phase 4 completion milestone – for which they are also driving/critical – because that milestone was encountered first in the user’s selection.  As a consequence, re-sorting the tasks in the overall project can alter the apparent driving paths for key delivery milestones when intersecting logic is present.

The same caveat applies when considering near-driving/critical paths for multiple key milestones in the same project, along with an added condition that a non-driving task will be included with whichever key milestone it is nearest to driving.  To illustrate, we have re-run the previous analysis while considering path relative float, and we’ve decided to re-color bars to clarify results. 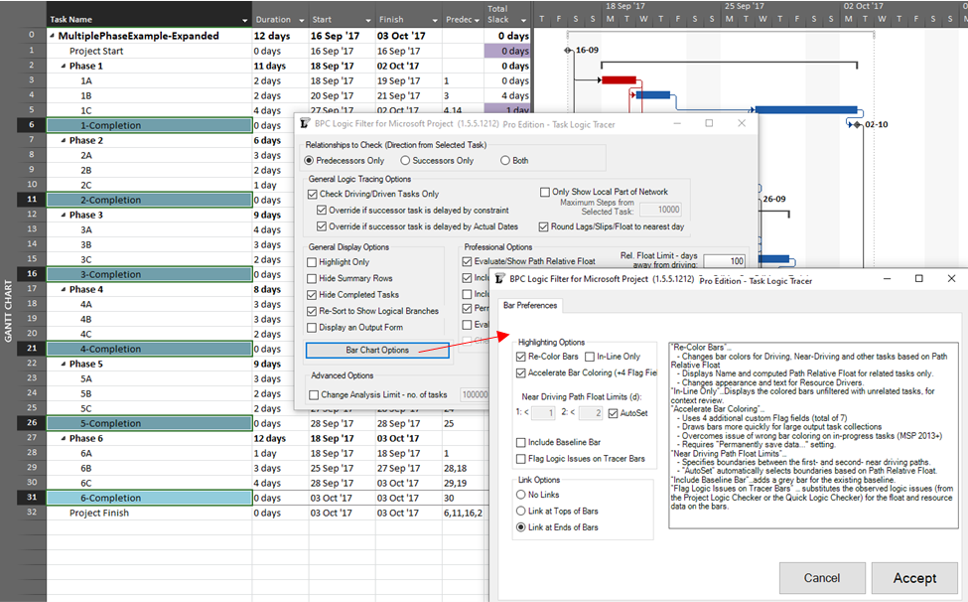 The resulting output is like the earlier one, but now including annotated bars and tasks whose path relative float is above zero (i.e. non-driving). 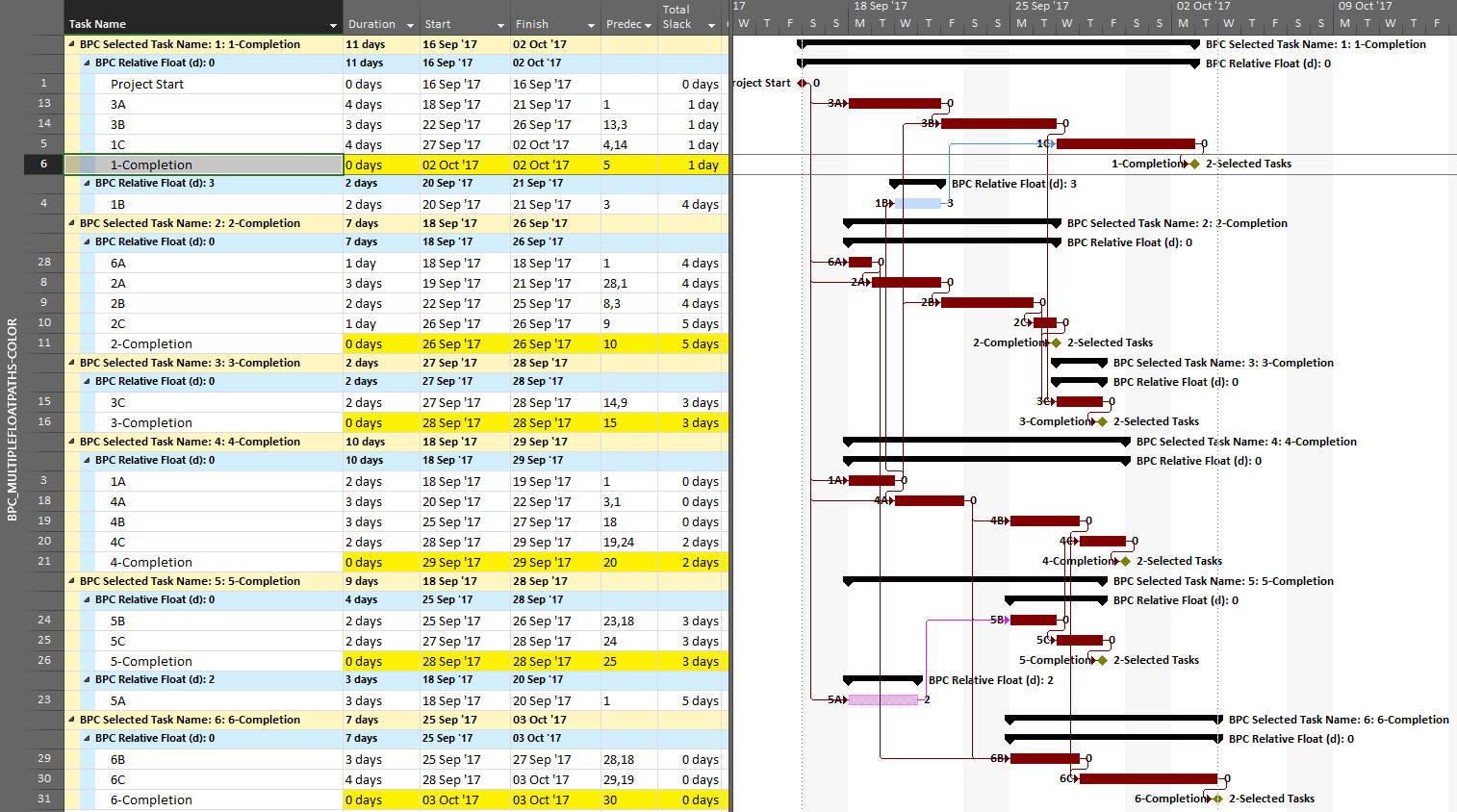 From the earlier article, we already know that task 1A is a non-driving path predecessor of the phase-1 completion milestone, 2 days from driving that milestone.  It is nearer to driving (and is in fact driving) the phase-4 completion, however, so that is where it is shown.

As we’ve seen, it can be difficult to differentiate the critical paths to multiple completion milestones in a complex project with lots of intersecting logic paths.  When a project or program includes multiple completion phases that are not closely related, however, the output is straightforward.  A good example of this case occurs when multiple unrelated subprojects are combined into a linked master project for reporting purposes.  Here I’ve used the New Window dialog to temporarily combine three simple projects into a temporary master.  Then I have applied a filter to show only the key completion milestones for the three subprojects.  Finally. I’ve run the task logic tracer with all the visible tasks selected.  A Pro Edition of the tool is required to analyze linked subprojects, and I’ve limited the relative float analysis to keep the resulting output small. 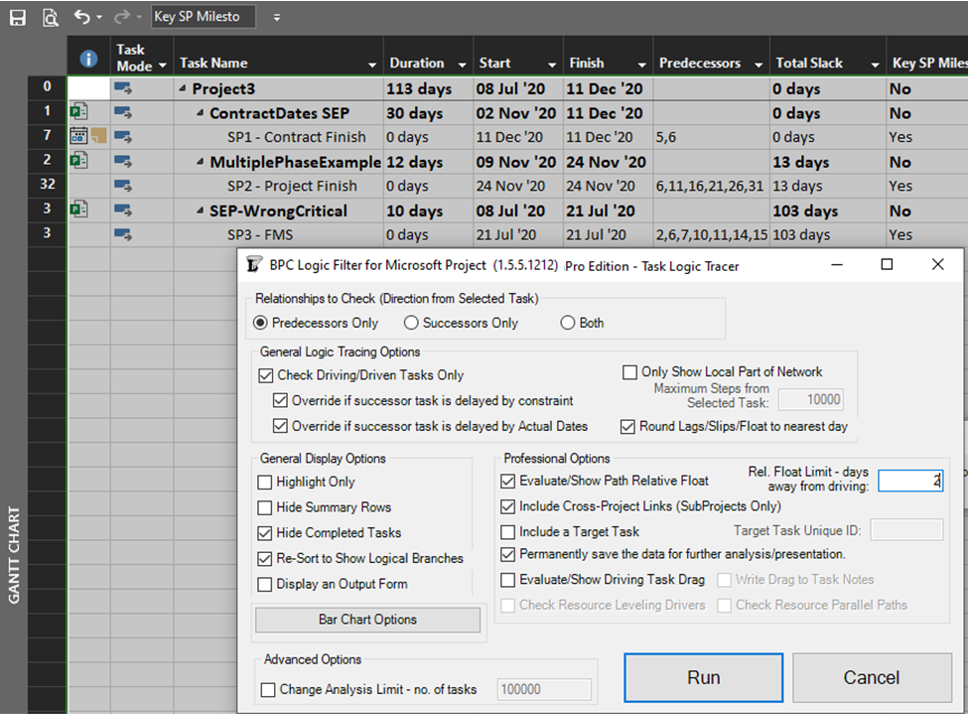 The resulting layout clearly depicts the critical/driving- and near-critical/driving paths for each subproject completion milestone.  As usual – for BPC Logic Filter – the definitions of critical/driving logic paths do not rely on the total slack, which is not reliable in many modern project schedules. 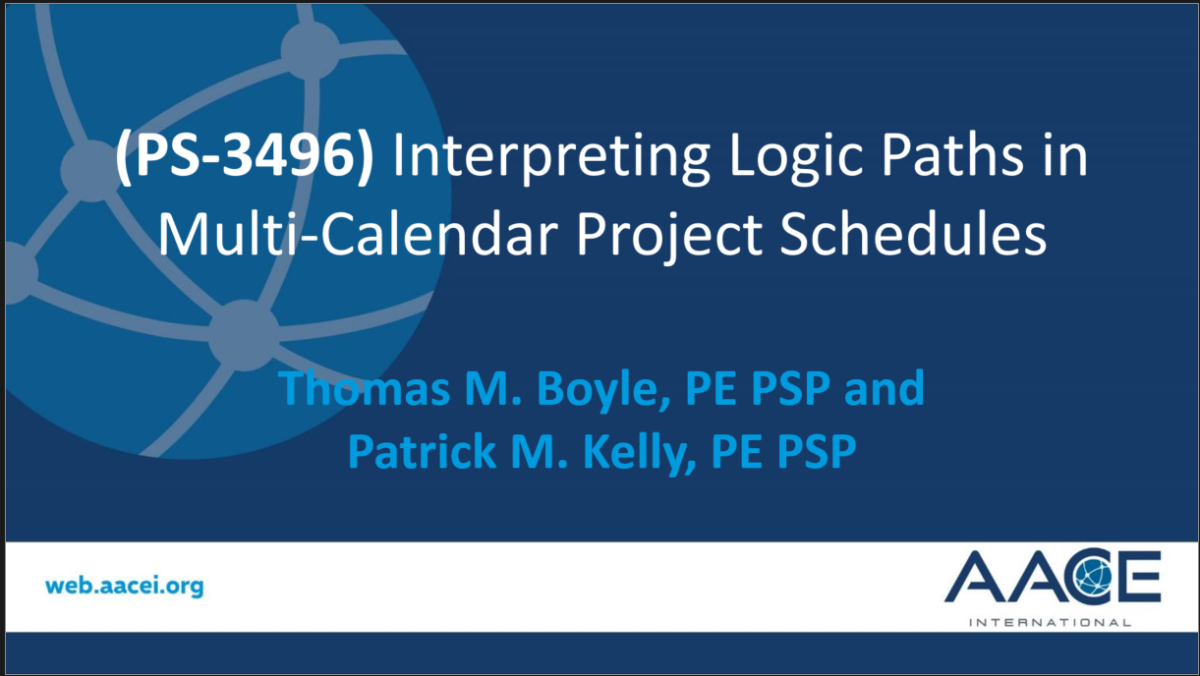 Last month marked my second attendance at an Annual meeting of AACE International (formally Association for the Advancement of Cost Engineering).  The Covid-19 Pandemic forced a change of venue from Chicago to Virtual/Online, with overall good results.  Most of the technical presentations were pre-recorded for viewing at leisure.  There was also a live track including keynotes, selected technical presentations, and business meetings.  There were attempts to facilitate online “networking” and other informal “events”, but I missed those.

Earlier in the year, I co-authored a paper (with Patrick M. Kelly) for presentation at the meeting: (PS-3496) Interpreting Logic Paths in Multi-Calendar Project Schedules.  It’s essentially a deep-dive into the Multiple Float Path calculation in Oracle Primavera P6 project scheduling software, expanding on (and in a few cases contradicting) my earlier blog articles, and Patrick’s paper, on the subject.  A slightly revised version of the paper is hosted on our website.  Pre-recording the presentation (as a narrated PowerPoint show) involved quite a bit more effort than a live presentation would have; I hope to become more efficient at it with additional practice.

The presentation (all 70+ minutes of it) and the paper are included in the Transactions bundle for registered attendees of the meeting.  They are also available for purchase by non-attendees (including a training certificate after viewing the presentation) at the AACE store.  I think the price is $25 for members of AACE and $30 for non-members.

I also got “elected” to the board of the Planning and Scheduling Subcommittee, and I look forward to taking over the coordination of our Recommended Practices from our rising Chairman, Jessica Colbert, for the next year. 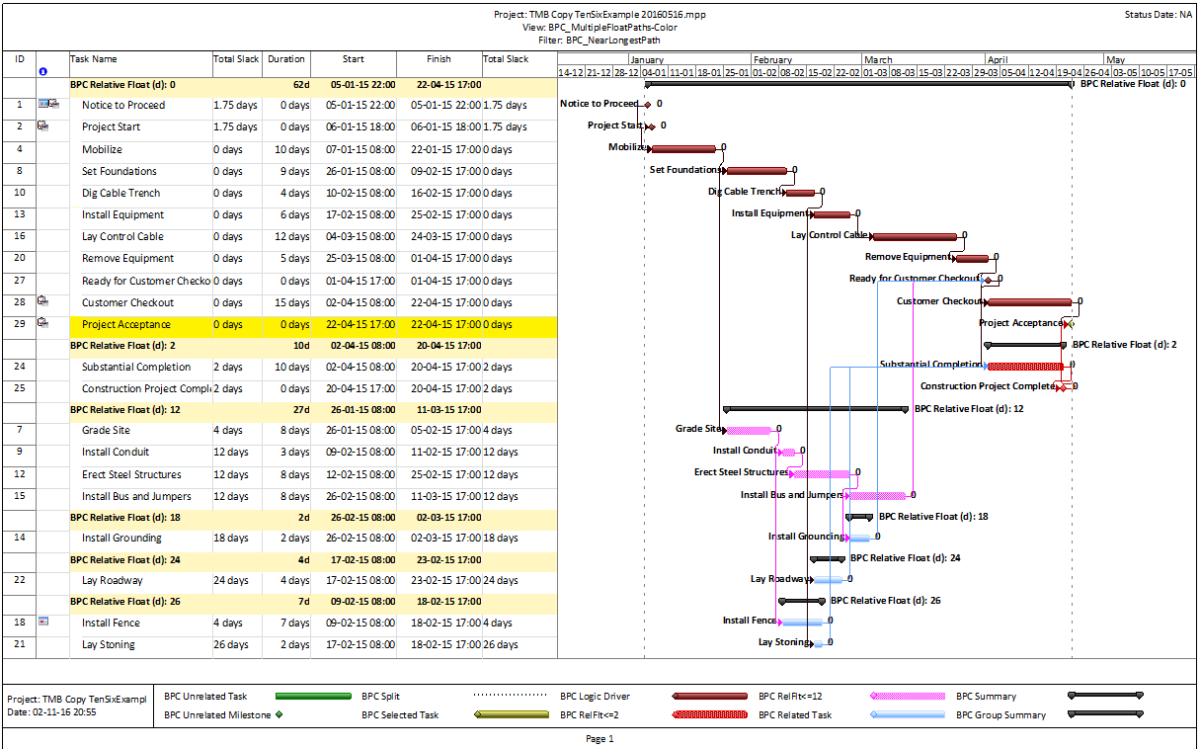 In the presence of Deadlines, Constraints, variable Calendars, and resource leveling, Total Slack becomes unreliable as an indicator of the Critical Path (or of nearness to the Critical Path).  For projects where the project completion is designated by the last task in the schedule, I use the Near Longest Path Filter to keep an eye on next week’s concerns….

Here is a video showing BPC Logic Filter in action, and repeating the same general themes as A Logic Tracing Example in Microsoft Project. 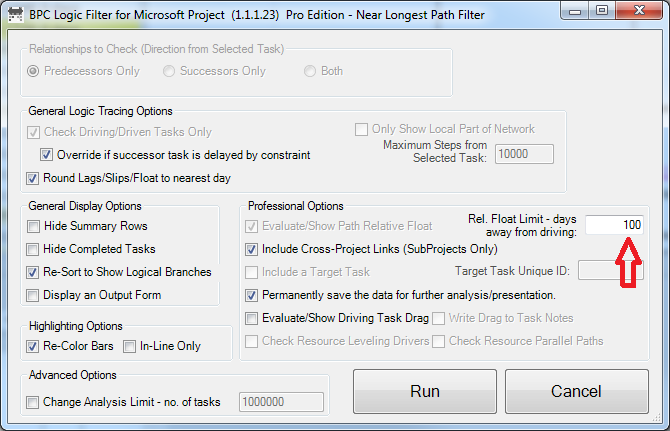 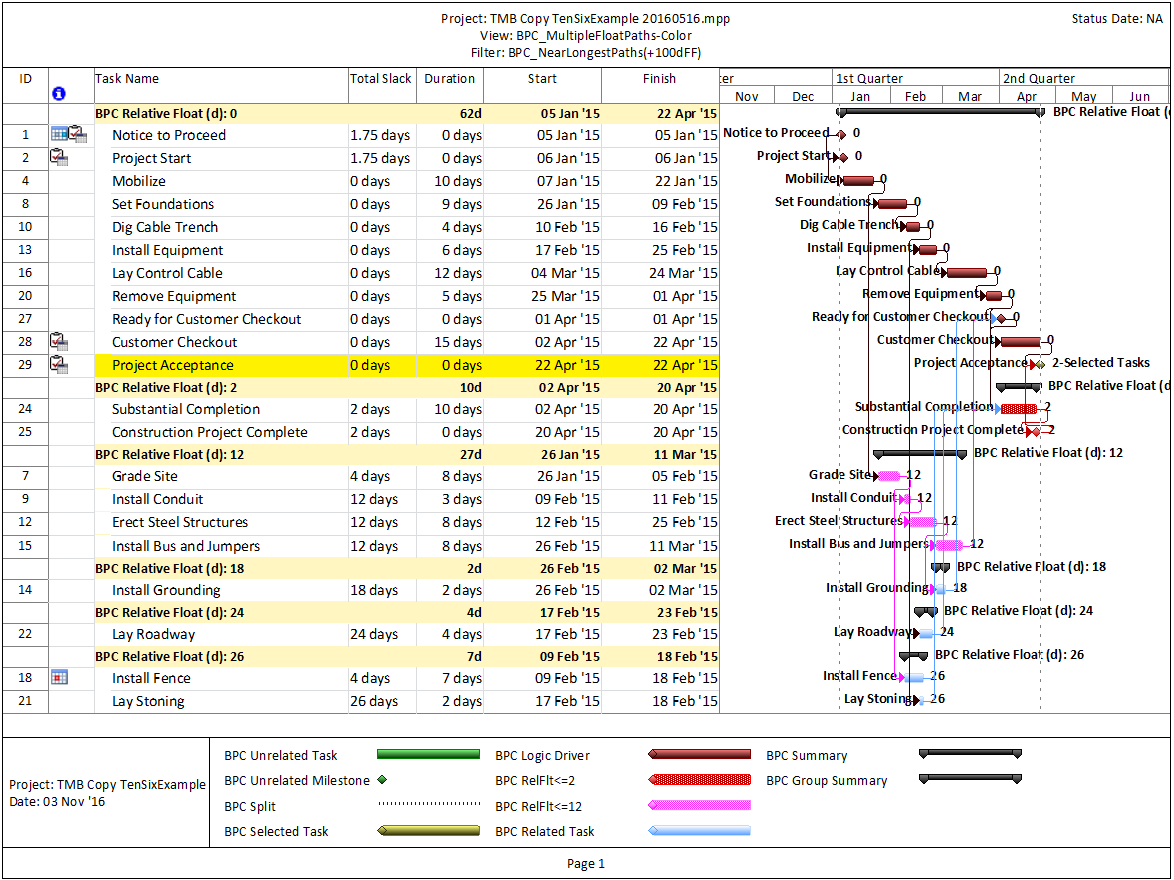 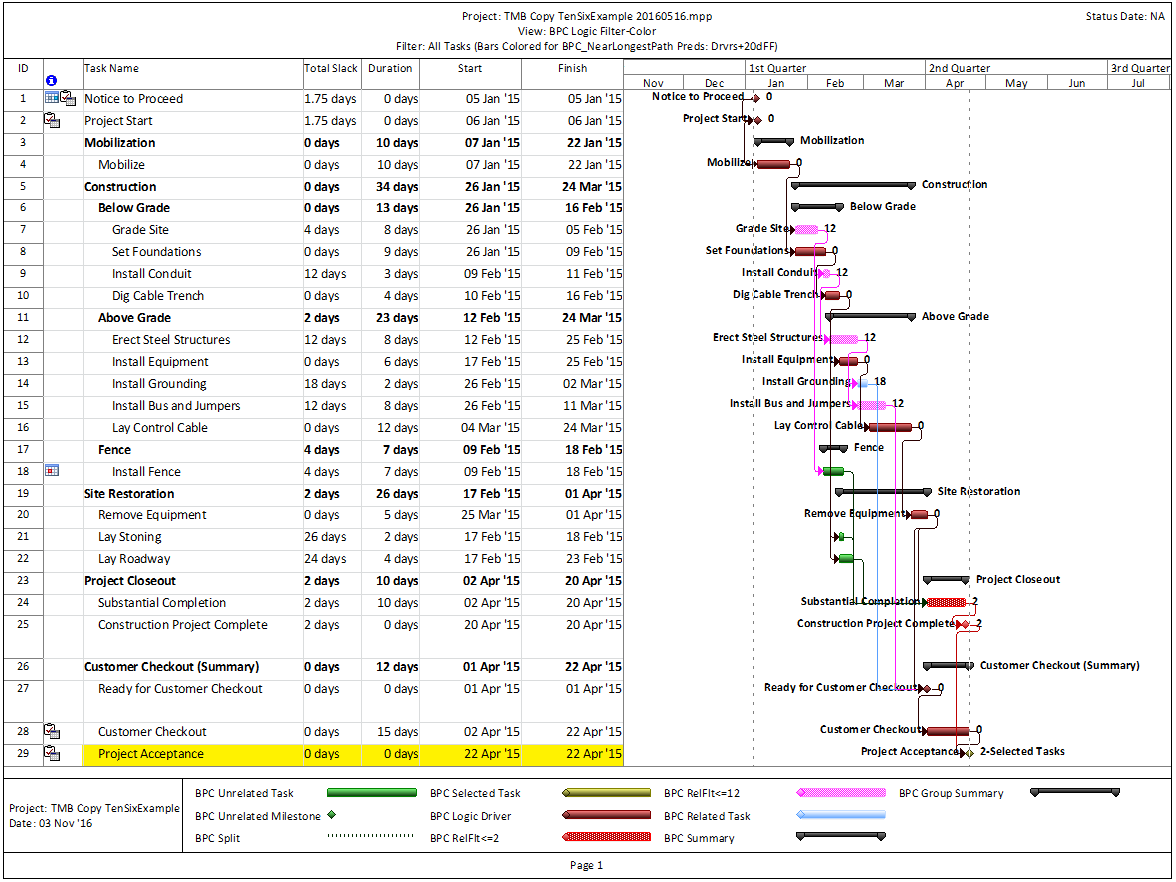